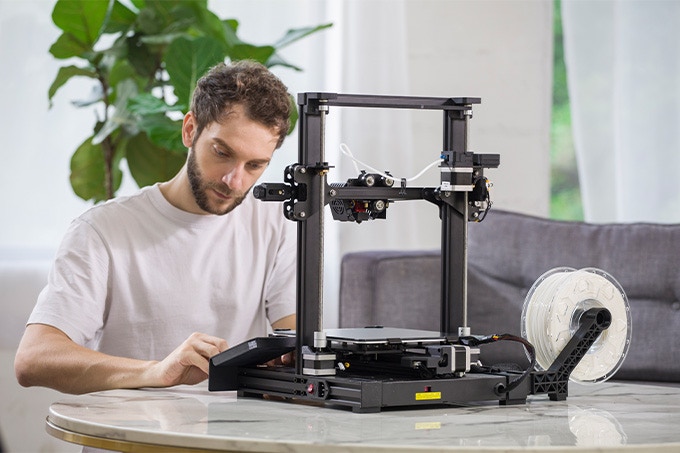 Creality has released yet another 3D printer and named it the CR6-SE. This Chinese manufacturer is well known in the 3D Printing Community all over the world and sold a massive amount of machines to makers and professionals everywhere. Normally Creality sells their 3D printers via platforms like AliExpress, BangGood, or the Creality website but this time they choose a completely different path.

Creality chooses to do a Kickstarter for the Creality CR6-SE which makes this the first-ever crowdfunded 3D printer for the Chinese manufacturer. Some members of the online community were complaining a little bit about this move from Creality but after only two days they managed to get funded over ten times the set goal of €90,817. So many other 3D printing enthusiasts do not mind that Kickstarter is the chosen path for the CR6-SE. At this point, the new 3D printer got funded for €3,039,671 by 8,795 Backers which is pretty amazing.

The Creality CR6-SE is built from Aluminium and very easy to set up because of the modular design. The frame is simple yet robust and holds a handle on top for easy transportation. The CR6-SE is easy to use and is equipped with leveling-free technology for superior accuracy. The printer has a nice 4.3″ inch Full-Color Touch Display and uses the latest silent Trinamic drivers for noise reduction. Feeding filament into the hotend is simple with the new reliable extruder, and the printer is equipped with an easy to maintain modular nozzle.

We can see that the Creality CR6-SE has a nice large build-volume of 235x235x250mm, it needs 1.75mm filament, and has a maximum nozzle temperature of 260°Celsius. It has a 32Bit Motherboard and silent Trinamic TMC2209 stepper motor drivers. (These are installed because Creality already exceeded some of their goals) The heated-bed can be heated up to 110°Celsius and the printer can reach a max print speed of 80 to 100mm/s. According to Creality, it is possible to print almost any material on the CR6-SE like PLA, PETG, ASA, ABS, Wood, and even flexibles like TPU. I wish I had a unit to test all this for myself but we have to believe our friends from Creality for now. The printer also comes with a filament sensor and can resume printing after a power outage. The supported languages are Chinese and English and you can use every Open Source Slicer on the market like PrusaSlicer, Repetier Host, Cura, and many others.

On the right side of the printer is where you can see the 4.3″ inch touch screen, and on the right side sits the spool holder. Another cool thing about the Creality CR6-SE is that it is equipped with an embedded tool/nozzle drawer under the build platform. And I also think that the leveling-free technology on this new Creality 3D printer must be something similar to the Automatic Mesh Bed Leveling on Original Prusa 3D printers and if that’s the case I am sure I would love to use this printer myself. The CR6-SE comes with a carborundum glass build plate which is similar to the Anycubic Ultrabase system. I personally never used a build plate like this but I’m sure it performs very well. When I started 3D printing I used glass build plates most of the time and they worked great also.

Should you back the Creality CR6-SE on Kickstarter?

I clearly can’t answer that for you but what I do know is that I am pretty certain that you will get a very good 3D printer for a very good price. The final retail price of the Creality CR6-SE will be around €400,- but if you are willing to back this printer on Kickstarter now you will pay a lot less and will be rewarded for your support. The Early Bird price is only €290,- or $319,-.

If you would like to support this project after reading this blog post then please be so kind as to use THIS LINK. This will take you to the Creality CR6-SE Kickstarter campaign page and when you buy something you will also support me a little bit in my work and I will be very grateful for that. The link will be available until June 6, 2020, so better decide quickly.