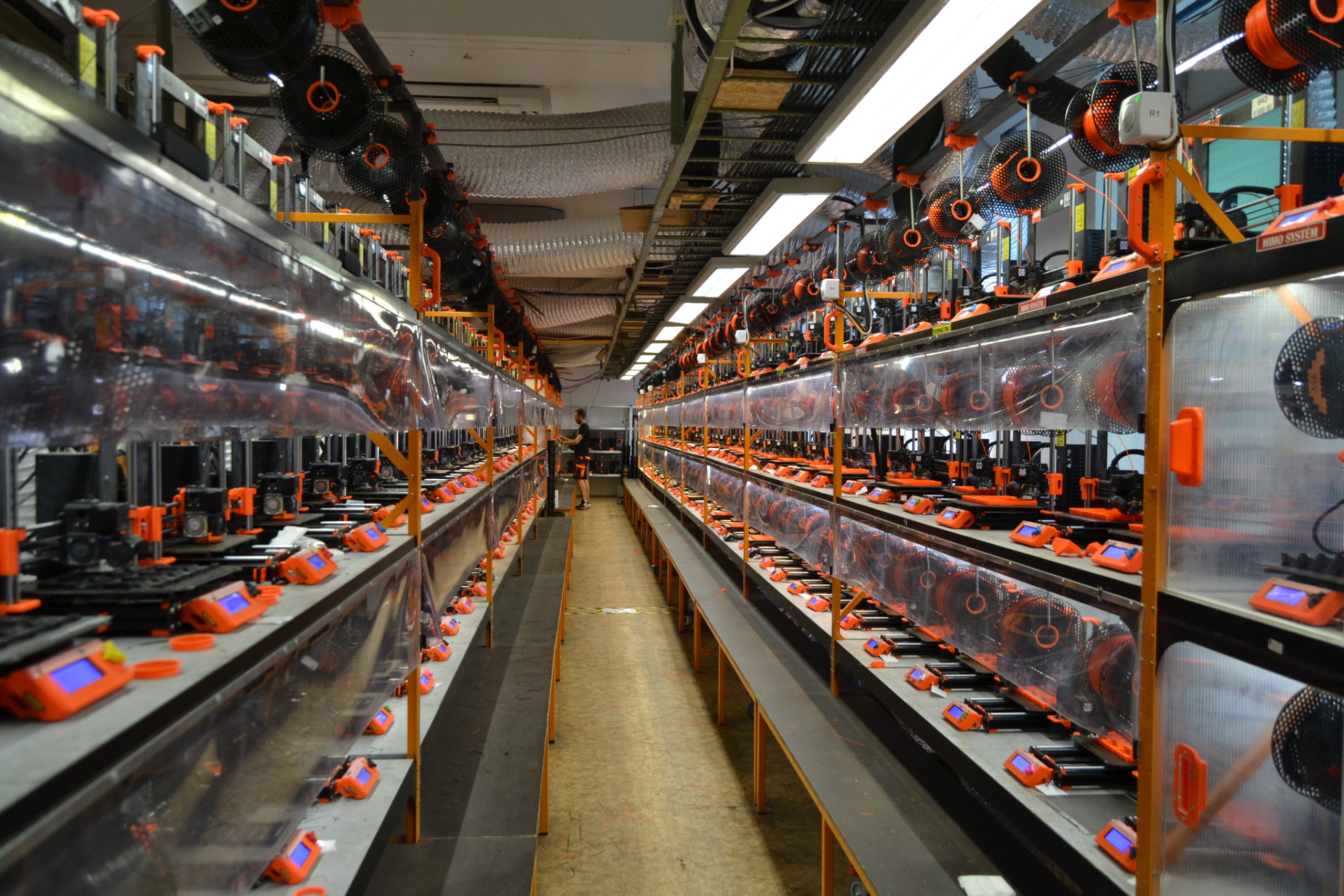 This trip was on my bucket list for a while already. Visiting Prusa Research in Prague, the factory where all the awesome Prusa printers and the spools of Prusament come from. I’m a huge admirer of what Josef Prusa and his team did and does for the international 3d printing community and obviously, for the city of Prague. Many people don’t know this but Josef actually started with 3d printing because he wanted to build his own designed add-ons to his Dj set and because he needed a 3d printer for the job he also builds his first Mendel. In 2010 he made his own heated bed and finished the design of the Prusa Mendel, a simpler design of the normal Mendel 3d Printer. In 2011 he had designed and built the second iteration of the machine called Prusa Mendel I2 and in February 2012 the time had come to start his own small business and Prusa Research was founded and the rest is history! From Hanka, the first Prusa Research’s employee to now a large 3d printer and filament manufacturer with over 450 employees. That’s pretty impressive in my book.

We (Me and my wife Erica) arrived in Prague early in the morning on Monday, August 26 and because we couldn’t check-in in the hotel until midday so we decided to go to the center of Prague for some breakfast. We took a long walk through the old center and after that, we walked to the Prusa Research building for a picture. It was great to see the headquarters in real life for the first time and after the photos were taken we walked all the way back to the hotel for some well-deserved rest.

The second day we had an appointment with Jennes de Schutter from Prusa Technical Support. I got to know Jennes after I contacted Prusa for a minor issue I had with my Original Prusa i3 MK3 and after that first talk we had on the chat we became friends and had several long conversations about 3d printing related stuff. The crazy thing was that when I told him that we were coming to Prague he shared the news with us that he was going to leave Prague after two great years at Prusa Research. He is born in Belgium and it was time for him to go back and start a new career back home so it was great to meet him in Prague in his final week there. He gave us a tour through the awesome PrusaLab, the incredible maker space with everything available from the Prusa SL1, Prusa i3 MK3, CNC machine, laser cutter, and more impressive tools.

The lab was closed for a renovation during our stay but we could have a tour around the place anyway which was really cool. After the Lab, we went up in the building to the Prusa Print farm where over 500 Original Prusa i3 MK3’s print all the parts for the new machines. The Print Farm is one of the most incredible places you can visit if you love 3d printing (and Prusa Research) as much as I do so a dream came true for me. He also showed us the top-level where Prusa Technical Support is based and all the cool stuff he printed while working there. I’ve seen some amazing prints during my stay and a couple of my favorites were the awesome weaponry Jennes printed.

The cool thing is that next to the amazing 500 printers in the print farm, there are another 400 Prusa i3’s placed throughout the building, and Prusa employees are free to use them whenever they like. Obviously a great way to test new printers and materials too. And with the in-house Prusament production lines there’s always enough material to test and use for awesome projects. They also print many cool things for events like MakerFaire which is awesome. I would be so happy to work in a place like that. It’s like Charlie’s Chocolate Factory but even better.

After we saw the Technical support department it was time for us to leave so we went back to the hotel for some food and went back to visit some beautiful sites in Prague. From Prague Castle to Charles Bridge and from the Jewish Cemetary to Vyšehrad we have seen it all. But thats another story! Also, I highly recommend to visit Prague yourself one day if you haven’t done that already. It’s one of the most beautiful places I’ve been to and I want to go back so bad.

On the third day, we had to return to Prusa Research ones again for a meeting with Josef Prusa himself. When we arrived at the HQ we went up to the 3rd floor to meet Josef in his office. We shook hands and he introduced us to his personal assistants and after that, we went for a drink on the rooftop terrace and enjoyed the views for a bit. After that, he gave us another tour through the complete factory and showed us everything. I also finally met a couple of people I got to know during the Prusa SL1 beta testing which was great. We were in contact for quite some time already but never talked face to face. I can’t show you anything more about the tour because some parts of the factory are closed off for the public but luckily the amazing Joel Telling aka. The 3D Printing nerd made an awesome video for his YouTube channel during his stay in Prague for the Prague Maker Faire. He had kinda the same tour so please take some time to check out his video if you would like to know what ive seen. Joel is much better at video’s than me and he’s more handsome too.

We also went to the studio where the guys at Prusa Research shoot all their awesome content for the websites and social channels. I think you’ve seen the studio on video a couple of times before like myself but being there in person is just something else. Great time for a photo with Jo.

After the tour, we had seen the Filament production lines, SL1 department, Development, PrusaLab, The Prusa i3 manufacturing facility, Technical support and everything else in the building so it was time for us to say goodbye.

We had the greatest time in Prague and the Prusa Research building and I’m sure we will go back next year to visit Prague Maker Faire and our friends over at Prusa Research. We want to thank Josef Prusa, Jennes, Ondrej, Simon, Lubomir, Vladimir and all the other great people who took some time to meet us. You guys are the best at what you do and it was an honor for us to come and have a look at your work. I became even more obsessed with the Prusa brand and have mad respect for these guys.